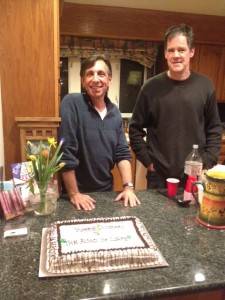 Composer and librettist Jay Jacques (right) has recorded two CDs, “Window on the World” (2012) and “Star Girl” (2010), for which he wrote both music and lyrics. He met his wife, Katrina, in Latvia, and it was her grandparents’ story of life in Leningrad during the siege that inspired the story for “The Road of Life.”

Lyricist and librettist Mark Chimsky (left) is a leading editorial consultant with extensive experience as a publishing executive and head of major imprints at HarperCollins, Little, Brown, and Macmillan. In addition, he was on the faculty of New York University’s Center for Publishing and is teaching at Emerson College this summer.  Hailed by The Nation as “an esteemed and gifted editor,” Mark edited Johnny Cash’s best-selling memoir, Cash. He also developed and edited the award-winning Creating a Life You’ll Love,with essays by Tom Hanks, Harold Prince, Anna Deavere Smith, and Ken Burns.